Super 8 and a Control Freak 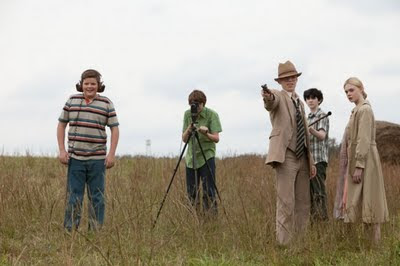 So far, I’ve seen "Super 8" two times. I’d like to see it again. This film has scratched an itch that I’ve had for a long time. It’s no secret that the director, J.J. Abrams (the newer Star Trek, Lost, Alias and...um...Felicity) wanted to make a Spielberg movie from the 80’s. Kids that get caught up in a something way bigger than they could imagine and winning the day with backpacks, bikes, overlapping dialogue and slightly foul mouths.

Do you remember that scene from “Ratatouille” where the food critic is whisked back to his mother’s kitchen and the comfort food she made for him? That’s how I feel watching this movie. Suddenly, I’m 13 year old Chris sitting alone in the theater and crying as E.T. is leaving Elliot, Gerty and Michael. From the soundtrack to the beautiful writing and fun adventure, it’s a place I haven’t been too in a while.

Part of the story is a movie within the movie. The kids are making a zombie movie to enter into a contest. As the credits roll, you get to watch the finished product entitled “The Case”. It’s awesome. And it made me realize how much of a control freak I am.

Let me explain. My sons (especially my oldest) love to make movies. And I have had some involvement in a few of them. I usually end up directing/controlling the ventures I am involved in because, well, I have a mature sense of what would be funny or interesting in scenes. I usually have a little moment when I realize that I’ve taken over the project but sometimes it’s too late.

In Super 8, Abrams (and Spielberg) are telling part of their story. They are letting us peak into what it was like when they were kids, running around with a Super 8 camera and dreams of cinematic glory, adventure stories, and scary wonder. These kids are free to make their movie even if it doesn’t come with a mature sensibility. It’s about kids making a movie kids would make.

This week, my boys had some friends staying with them and they all saw Super 8 together and then set to making their own movie. I stayed out of it. The way you get good at something is to just do it. To make an attempt at the level you’re at.

I have a friend in Canada that is determined to learn to sing songs, write poetry and play guitar. His attempts are not yet perfect but they are awesome. He is reaching, trying, stretching and growing. His poems are insightful, his songs are surprising and his outlook is fresh and creative. He is seemingly free from worry over what others think of him while he grows. I want to be like that.

I want to free others to feel like that.

I was at a concert festival in Texas listening to Phil Keaggy. This concert seemed to be running by a pretty strict time schedule and Phil’s set got cut short. He was gracious and respectful of the schedule but if Phil Keaggy is playing the guitar, you should just let him play till he’s done. A friend turned to me and said, “Man, sometimes you gotta stifle utility and let art flow!” We laughed so hard and that line became our mantra for creative freedom.

And here’s the boy’s movie as they wanted to make it. It's perfect.

Posted by Chris Whitler at 7:28 AM

I think you should send it to the marketing director of Nerf.

Josh, great angles, shots, and acting.
Awesome, I love it.
Sam, I died laughing at your part. Great job!

no joke, over the weekend while i was working, i really felt like God was saying, "Release people to be who they are. Love people enough to walk through the times when things get weird, awkward, and/or messy."

i get it, the church should not be full of, "constipated amish" but Jesus followers who are FREE to discover who they are in Him and encouraged to live it out in the context of community.

love you bro, peace and all good.