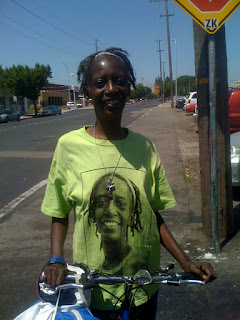 This is Dellanora Green (wearing a green Dellanora Green shirt!).  She has been a staple character in downtown Modesto for many years now.  You can see loads of videos about her on youtube under "singing homeless lady" and other titles (THIS ONE is pretty good).  She is an easily recognizable figure downtown.  She has a strong voice and sings familiar songs for anyone to enjoy.  Singing is how Dellanora makes her meager living.

Dellanora is not an intimidating person.  She approaches folks downtown and asks if they would "like a song for a donation."  If you say no, she politely walks on until she finds someone interested.

Quite a few years ago now, Jimmy from our team, helped her to record a Christmas CD so that she could sell them to people who wanted to support her further.  We've kept in touch with her through the years.

Last week, I saw her downtown as she informed me that she had been issued a warning citation to stop singing as it falls under our "aggressive panhandling" bi-law in the city of Modesto.  If you have ever encountered Dellanora, you know how silly that is.  She is far from aggressive and she offers a service for very little.  She'll take whatever anyone can give and does not badger people for money.

She is literally singing for her supper.  A local lawyer has offered to help Dellanora produce a petition for folks to sign to allow her to keep singing on the streets of our city (hear Dellanora talk about it HERE).

I know that I'll be looking for her this week and adding my name to that list.  Could you?

I am not against the police or the government and I indeed believe that we should work as a community to discourage aggressive panhandling.  But Modesto can be a compassionate community and I believe allowing Dellanora's voice to fill our streets is part of that.
Posted by Chris Whitler at 9:14 AM

Don't know if you are still in Modesto but If you see Dellanora again or around can you let her know that her mother and daughter are looking for her thank you!