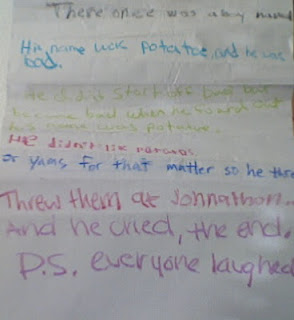 Ok, one more... Once upon a time, there was a platypus His name was Robert. His primary concern was making a million. But no one would hire him because he had hooks for hands. So he got angry and mean. And thought about mass destruction (same kid). So while he was thinking, he went and got nachos. Because nachos always solve everyone's problems. The end.
Posted by Chris Whitler at 8:45 AM