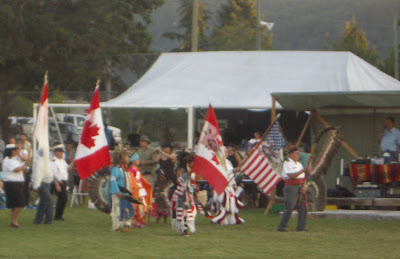 It's hard to know how to begin this post. I don't feel like I have to be careful, I want to be. It's how I felt all last week in the Tsartlip village near Victoria on Vancouver Island off the West coast of British Columbia in Canada. The Tsartlip village is a reservation for indigenous people. In Canada, they say "First Nations" people or "aboriginal". The people in the village say "Indian" and "reserve" or simply "the rez".

We were there with a team assisting a YWAM couple that do community service and youth development there. Mua is Samoan. His wife Marie grew up in Tsartlip. We helped them run a day camp for the kids of the community. Nothing fancy, just hanging out with kids and having positive interactions.

We were welcome. The people's natural disposition is not overly warm but they are welcoming if a little held back at first. They did want to know who we were, why we were there and who these strangers were taking pictures of their kids. It's the way I would feel if complete strangers showed up to run a program for my children. I would check them out.

The wounding of indigenous culture by larger, invasive cultures is something I don't completely understand. But I know it's important to learn about here and all over the world. It's part of why I went...to learn, listen and carefully seek out. It was a great time for our family and the team we were with.

Before I got there, I felt a bit intimidated going into an unknown...worried I would misstep or say something stupid. And then I remembered a meeting I was a part of in Fresno. A couple of friends and I went down to talk to some ministry leaders down there. We were talking to Brian King about his work with the gangs. One of the guys with us asked if we would ever have credibility with the guys in gangs as many of us came from middle-class families. Brian looked at us, smiled and said "man, people are people." Everyone responds to genuine attempts at friendship and understanding even if the attemps are a bit clumsy.

So that's what we did in Tsartlip. We flowed with the slow, methodical culture, asked questions, listened and played with the kids. We attended and volunteered at the Pow Wow weekend. We ate fried bread (mmm). We danced. Kids are kids. People are people.

Here's some pics from our time there (facebook readers will have to click "read original post up there at the top)...or you can view it by GLONKING HERE.

Thanks for leaving a comment at our table! Good luck!!
(a fellow YWAMer!)
~kristin