North! Or Be Eaten. 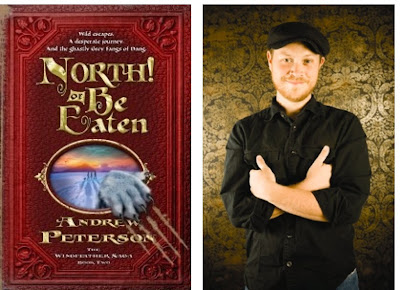 I became aware of Andrew Peterson's work long before he became an author. Please, indulge me to do a bit of set up for a review* of his latest book, North! Or Be Eaten. Book Two of the Wingfeather Saga.

I have a small circle of friends that grew close with Rich Mullins' music as the soundtrack of our relationship. Rich brought depth, creativity and voice to our common questions and longing. Have you ever come to the end of a story that you just don't want to end? When I first finished The Lord of the Rings and Samwise was home, I cried. The story ends beautifully, yes, but I also cried from mourning. My first thought was "Well, I did it. I've ruined every other book I will ever read by reading this one. I'll never find one better." That's the way it felt when Rich Mullins died.

Like the Steven Lawhead book that cured my broken heart for a good story, Andrew Peterson came along with dulcimers and guitars and thoughtful lyrics. His music did that thing that I had missed so much. In 2003, he made a rare visit to an obscure music festival in Northern California and a friend and I went out to hear him. We were part of a very small crowd.

After the concert, we were talking to Andrew and his accompanist and collaborator Ben Shive at the record table and they talked us into giving them a ride to another town where fellow Square Pegger, Jill Phillips, was singing. We, of course, were happy to oblige (even though they kinda made fun of my car). On that trip, Andrew Peterson told us about a story...

It was about a boy who grew up not knowing who he was. This boy lived an everyday life unaware of the wonder that lurked just beyond the peripheries of most people's view. The story was about the adventure he experienced learning who he was. This boy wouldn't always have the right perspective. In fact, he would end up making big mistakes and taking those closest to him for granted. He would act out immaturely. He wouldn't have the whole picture. The boy would have to experience pain, humiliation, the thrill of hope, the dark of doubt, tenacious friendship, challenging quests and the grace that comes from true love played out in an imperfect but committed community. The peril would be real but told with humor, elegance and with respect for it's audience. And in the end, we would have come on a journey of our own, not just observers of the story, but experiencing all that disappointment, fear, surprise and exhileration right along with the boy. Not an allegory, but a story encoded with The Story and like good music, giving voice to our longing.

The way Andrew talked about this story made me anxious to read it. And I did.

Harry Potter and the Order of the Phoenix would come out later that year and partly due to Andrew's rave reviews, I read all seven Harry Potter books.

North! Or Be Eaten, is book two in the Wingfeather Saga by Andrew Peterson. If your heart broke in the Kings Cross railway station at the end of "The Deathly Hallows", come away to Aerwiar and run with Janner Igiby and his family away from the Fangs of Dang, past Toothy Cows, Rockroaches, Bomnubbles and Snickbuzzards and into all for which we read a good story. First, read On The Edge Of The Dark Sea Of Darkness. Then continue on as Andrew spins his tale wider and richer. New cultures, landscapes and characters fill out the journey begun in "Dark Sea." This is a story for all ages. I laughed out loud, got scared, cried real tears and reached a point where I could not put it down and did that excited reading thing where you race ahead in the text hoping your suspicions are right. It's good. It's "break your heart" good.

This series may not see the phenomenal literary success of Narnia, The Hobbit or the Potter books (although I hope it does). But like all these stories teach us, the best treasures sometimes lay hidden. And when the time is right, the unsuspecting child in all of us opens a door and steps across a threshold to find courage to face danger, power to fight, light for the darkness and a world dripping with beauty, mystery and grace. And the occasional quill diggle.


*any similarity of this review to the forward (by Winkie Pratney) of "No Compromise, the Life Story of Keith Green" was purely intentional.

I agree! Aww, your review is so much reviewy-er than mine! Well done!

Thank you, Chris. I remember that car ride, and I vaguely remember your car. It was a stretch-limo Hummer, right?

Great review! I'm already a fan, but if I wasn't, you'd have piqued my curiousity. God Bless! -Mike

Thanks for the review! I did a post too for the review tour, and man was I happy with N!OBE. I read people saying it was even better than the first and thought that maybe they were just speaking excitedly.

Then I came to the end of N!OBE and found I was greatfully picking the pieces of my heart back together. God is so good to us!!! It's cool to see an artist like Andrew touched by that fact, and to see him share it in his work.

It must've been a blast having Andrew and Ben in your car. But after your story, I'm wishing I could see a picture of your ride.

Thanks for posting your review Chris!

Hey, I got your comments. Thanks. If you're interested in blog tours you should check out the Christian Sci-Fi Fantasy Blog Tour. I've been doing it for a while and I'm loving it.

You can find it at http://csffblogtour.com/