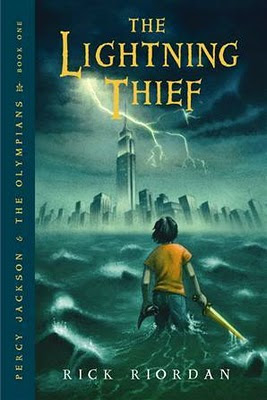 "Percy Jackson and the Olympians: The Lighting Thief" is the story about a kid who has been kicked out of almost every boarding school in New York. Life does not seem to be looking up for Percy right now, until he finds out he is a demigod (half mortal, half god). So, he flees to Camp Half-Blood where he finds he is the son of Poseidon, the god of the seas. If that weren't enough, taken directly from the back of the book, "Zeus's master lighting bolt has been stolen and Percy is the prime suspect". Now Percy must find the bolt, clear his name and find the real thief in ten days.

There are a lot of differences between the book and the movie. The hydra fight in the museum in the film was like the castle siege in the Prince Caspian film, it was disappointing because I really wasn't expecting them to add extras. This is Chris Columbus, the guy who made the first two Harry Potter films which were, of all the the Potter movies, closest to the book. And, in the book, there was a big 'ol fight with Ares, the god of war, that I would have liked to have seen in the film. All in all the movie was very far apart from the book.

I liked the book more than the movie because there is a deeper story. It gives you a sense of "oh no, what are they going to do next!" I think you would like it. Give it a try!