We called my Grandfather "Popo" : )

This is a re-post of a story I submitted over at the Hog's Head website (thehogshead.org). Yes, my geekliness is showing through but I love this blog style site that discusses Harry Potter and other meaningful stories. It was there that I found out that this is national storytelling day. So they invited anyone to leave an oral tradition type story as a comment. Here is mine on remembering my Grandfather... 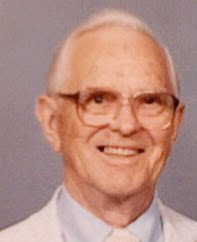 My Grandfather was one of the funniest people I have ever known. To call him Grandfather feels weird. We called him "Popo" because the first grandchild picks for everybody else. My Grandmother was consequently "Momo".

Popo was always "on". Also, he repeated many of his jokes over and over to the point that they became a kind of liturgy that I still remember and sometimes carry on because I can't help myself. When this happens, Popo would say that. If we were stuck at a stop sign at a busy intersection, Popo would say, "Somebody opened the gate and let 'em ALL out!" There were a million of those. He loved kids and loved to make them laugh. I remember him as one of the first adults who had timeless time for me

He was also the hardest worker I have ever known. For years, he worked as a rigger (that's welding and construction at very high heights) for Louisville Gas and Electric. In younger years, to save money so he could marry my Grandmother, he hitch hiked to Detroit to get a job in a factory when work opportunities in Kentucky were scarce. He was too young for the draft in WWI and too old for WWII (he also had flat feet) and so he worked in ship yards building for the navy. He always had a huge garden. It was way too big for his family to consume all the produce so they canned the excess as well as shared it with their church community on Sunday mornings.

Popo was a year away from full retirement benefits at his company when he had a terrible accident. He was working on the roof of a building and slipped off, falling several stories. He told me that he remembers thinking as he was falling that he didn't want to just land, he wanted to land with a purpose. So he twisted himself around so that he would land on his feet, giving him the chance to roll quickly over and minimize the damage to his body.

The impact immediately broke both of his heels but he did manage to roll when he hit. Being just months away from full benefits, his boss could have let him go because of his disability. There was no way he could continue his work. He would have lost everything. But, it was a different time. Somethings were more important than the bottom line. His boss told him that he expected to see him at work until he qualified for full retirement.

Popo did just that. He came in everyday and made coffee for the guys, cleaned up and did what he could at the work sites. And later that year, retired with full benefits.
Posted by Chris Whitler at 1:31 PM