"He descended into hell" 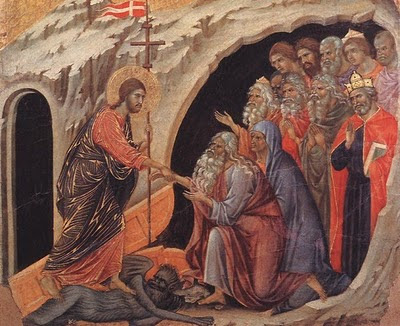 We've been going through the Apostle's Creed line by line with our youth group and this line's lot fell to me (oh happy day). If you are unfamiliar with the Apostle's Creed, it's one of the oldest in Christendom (so old we don't know who wrote it) and has been for our non-denominational church, the bible affirming creed we look to for our understanding of Christian belief. It says...

I believe in God, the Father Almighty,
the Maker of heaven and earth,
and in Jesus Christ, His only Son, our Lord:

Who was conceived by the Holy Ghost,
born of the virgin Mary,
suffered under Pontius Pilate,
was crucified, dead, and buried;

He descended into hell.

The third day He arose again from the dead;

He ascended into heaven,
and sitteth on the right hand of God the Father Almighty;
from thence he shall come to judge the quick and the dead.

I believe in the Holy Ghost;
the holy catholic church;
the communion of saints;
the forgiveness of sins;
the resurrection of the body;
and the life everlasting.

Here are my notes and a little song I shared with the kids last week...

“He descended into Hell”

What goes up must come...? God’s kingdom is always backwards.

In our experience, it’s first come, first served.
In God’s Kingdom, the last will be first and the first will be last

The world, if you want to be the greatest, you fight and claw your way to the top (reality tv, survivor, the apprentice)
God’s Kingdom, the greatest among you will be the servant of all

In our world, to have it all, you have to take it while you can.
In God’s kingdom, to find life, you have to lose it

Jesus hinted at his future journey into hell when he taught his followers that he would give them the sign of Jonah. What is the story of Jonah?

Jonah jumped into the sea in order to follow God and save his fellow sailors. And the Bible says that God caused a great fish to swallow Jonah and he was in the fish’s belly for 3 days and nights.

Jesus went to the cross, not because of his disobedience but because of ours. He jumped into the sea for us. And he spent 3 days and nights physically in the grave and the Bible teaches that during that 3 days, he journeyed to hell itself and preached to all who were captive there.

There are hints of it all through the old testament but explicitly in 1 Peter...

For Christ died for sins once for all, the righteous for the unrighteous, to bring you to God. He was put to death in the body but made alive by the Spirit, through whom also he went and preached to the spirits in prison who disobeyed long ago

1 Therefore, since Christ suffered for us in the flesh, arm yourselves also with the same mind, for he who has suffered in the flesh has ceased from sin, 2 that he no longer should live the rest of his time in the flesh for the lusts of men, but for the will of God. 3 For we have spent enough of our past lifetime in doing the will of the Gentiles--when we walked in lewdness, lusts, drunkenness, revelries, drinking parties, and abominable idolatries. 4 In regard to these, they think it strange that you do not run with them in the same flood of dissipation, speaking evil of you. 5 They will give an account to Him who is ready to judge the living and the dead. 6 For this reason the gospel was preached also to those who are dead, that they might be judged according to men in the flesh, but live according to God in the spirit.

So yes, we believe in Satan (the devil) and we believe in hell (a place of punishment for Satan and all the rebellious spirits, human and angelic)

We do not fear hell. Jesus has been there and is Lord of it. He preached to the physically dead who were there and led the captives out of it’s prison. Jesus descended into hell because he loves people.

What does that mean to us?

It means Jesus is willing to go into the scariest places of all in order to save us and see us free. It means that there is someone who is willing to sacrifice everything and journey to the deepest places there are to see you live in love.

He created the earth and people because of love

He came from heaven to earth because of love

He lived with the sick, the poor and the ordinary because of love

He went to the cross, because of love

He descended into hell because of love

And the good news is that when life is lived for love...what goes down, must come up!

If you're reading on facebook, you can watch and listen HERE.
Posted by Chris Whitler at 4:41 PM

All the stupid stuff doesn't matter my brother.
He has done it... Life conquered death.
Jesus Christ has won.