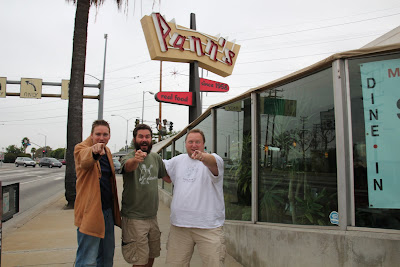 A Spidie-Sense fable by A. Alford, T. Nelson and C. Whitler
Based on true events


Today, however, is no day for no big deals.


Chris, Aaron and Terry are basking in the glow of their one night stand in Los Angeles. Chris had remembered the breakfast place on a previous visit and told the guys about it.


“It’s the best!” Chris had said. “Their grits make me cry like a baby woman.”


If there was one thing Chris did know about, it was food. So, they all thought it would be the perfect end to a great visit before Terry has to catch his flight back to Canada.


The boys enter the old fashioned cafe, full of hopes and expectations for their chicken and waffle experience.


As fate would have it, Terry has a minor problem. His cellphone is about to die and he needs to charge it. Explaining his situation to the helpful hostess, she leads the guys to a patio area, near the only available power outlet in the restaurant, fatefully seating them right beside Famous Hollywood Star and his older table mate.

Chris, a large, noisy and silly man, sits down facing Famous Hollywood Star. The older African American gentleman, wearing a vest with a tag on the back that reads “Judge Joe Brown”, sits with his back toward Chris.


Chris is immediately flustered by the possibility in front of him.


Aaron tries to get Chris to calm down. Chris thinks Aaron is being too nonchalant about the celebrity in front of them. “No! We have to say something! We have friends that watch this guy everyday! We need to at least get a picture!”


“Everyday? Who? Don’t you think he just wants to eat in peace?” says Aaron through his dictator beard.


“Celebrity comes with a price!” says Chris, “he knew what he was getting into.”


“Who are you talking about?” says Aaron.


Terry had already formulated a plan.


“We play it cool” says Terry, the most experienced in meeting famous hollywood stars. “Don’t look over there. Take it easy.”


Chris tries to settle himself, although it’s hard to not watch Famous Hollywood Star eat his eggs, grits, fried chicken, waffle and sausage in his pristine track suit and his (now for Chris) unmistakeable, striking, usually-on-the-big-screen face. But he knows he needs to follow Terry’s lead.


“Here’s what we do” says Terry, “We talk a little louder than usual but just amongst ourselves...”


Aaron is now nodding, knowing exactly where Terry is headed. Chris has a vacant look on his face.


“We mention all of his famous movies in conversation to let him know we know who he is, capice?” Aaron is tracking. Chris pretends by making a face that says “Gotcha.”


“As you well know, I am flying later today.”


“Well, I don’t like to be first on the plane, nor do I like to board toward the end. I’m more comfortable getting on somewhere in the middle. I hope today I'm... oh... say... PASSENGER 57 or so.” says Terry.


Famous Hollywood Star continues to talk to his friend and eat his fine food.


“Oh I’m sure we won’t.” says Terry, “I’m confident our plane will be as secure as the RISING SUN”


“Right you are.” says Aaron, “Say, is that coffee at the BOILING POINT? I like it hot. Like it was at this sweet little diner in New York. That coffee was the best. Definitely BROOKLYN’S FINEST.”


“Yes,” says Terry, “The coffee’s just right, but it does need some SUGAR. Maybe a mound of it. A SUGAR HILL, if needs must.”


This seals the deal for Chris. He decides to jump in. “Hey guys, do you like those courtroom TV shows?”


“It’s not Judge Joe Brown,” Aaron exasperatingly whispers. “But Chris,” proclaims Aaron, “do be a dear and hand me that BLADE, I want to PLAY IT TO THE BONE with this piece of chicken.”


A dawning realization comes to Chris’s confused mind, and his head makes an exaggerated nod as he hands a butter knife to Aaron.


“No thank-you, friend,” says Terry, “not even a BLADE TRINITY or fifty US MARSHALS could ZIGZAG this UNDISPUTED, UNSTOPPABLE breakfast from its path to my mouth. That chicken and waffle’s about to face the DEMOLITION MAN!”


Famous Hollywood Star is not acknowledging the conversation as he takes down another fluffy bite of waffle.


“Well that certainly is NEW, JACK. CITY dining is always the best, I find,” says Aaron.


“Funny you should mention that, Aaron.” states Terry. “This fine eating establishment reminds me of a story. My friend Julie took us out for dim sum last week. I was a bit nervous about the whole ordeal seeing as I had to endure chicken feet and other shady, off-putting dishes the first time I'd tried it. But, based on the confident recommendation by our gracious host, I really took TO WONG FOO. ‘THANKS FOR EVERYTHING, JULIE NEWMAR!’ is what I told her.”


Their cleverness has overwhelmed Chris with excitement, and he feels he is about to explode. I, too, am clever! thinks Chris. I too shall cleverly insert films into my dialogue!


Terry and Aaron know the gig is up. Their boisterous friend has once again ruined everything. There’s only one thing left to do. Slowly, they rise from their seats, and Chris follows. It’s time to reveal, finally, that they know who it is that’s been enjoying chicken and waffles and grits and eggs and coffee.


And as the Famous Hollywood Wesley Snipes fingers one last bit of fried chicken skin from his plate, he doesn’t even notice the wormhole that tears open the fabric of reality behind the three morons, carrying them away to another universe where they can never bother him again.


The chicken is that good.

“Their grits make me cry like a baby woman.”

A great laugh to start my day. Thanks!
Ruth

What are the true events that this is based on?

James, we did eat at a gourmet "soul food" place in LA. We did sit next to Wesley Snipes. I did not recognize him. I did indeed freak out as I thought his friend was Judge Joe Brown. It was not. Mr. Snipes probably assumed I was freaking out over him as I was sitting directly opposite him. Mr. Snipes did order waffles, fried chicken, eggs, grits and sausage and ate every bit of it.

After they left, we came up with the rest of it.

But the wormhole really did swallow us and I have lived 50 years in another world where I reigned as a king over people that grew only as tall as my knee. I lived till a ripe old age of 89 and nearly died on my my throne in my palace (very large to my subjects but really the size of a small bungalow to you and me). Just as I was confirming the next in line of succession to rule in my place and taking my final breaths, the wormhole opened up again and dropped me back (in my previous age) with Aaron and Terry in LA where we looked at one another and just laughed and laughed.

Terry had been a woman version of himself in another dimension. Aaron had lived 20 years inside the consciousness of Fidel Castro (it must have something to do with his beard).

And then we all three walked off.

Most excellent. Those wormholes are a trip.