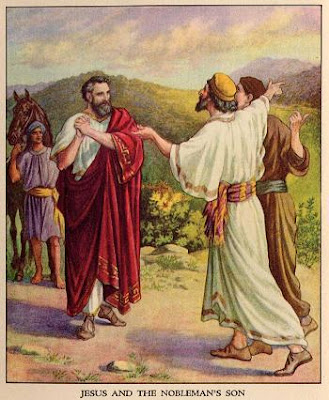 ...at Caper'na-um there was an official whose son was ill. When he heard that Jesus had come from Judea to Galilee, he went and begged him to come down and heal his son, for he was at the point of death.

Jesus therefore said to him, "Unless you see signs and wonders you will not believe."

The official said to him, "Sir, come down before my child dies."

Jesus said to him, "Go; your son will live."

The man believed the word that Jesus spoke to him and went his way. As he was going down, his servants met him and told him that his son was living. So he asked them the hour when he began to mend, and they said to him, "Yesterday at the seventh hour the fever left him."

The father knew that was the hour when Jesus had said to him, "Your son will live"; and he himself believed, and all his household.

The different ways Jesus chooses to heal always surprises me. To some he says "be healed", for others he heals remotely, for others he spits and rubs mud on their face...you get the idea. You can't lock Jesus into a formula.

May it be said of us as it was said of this official..."The man believed the word that Jesus spoke to him and went his way." To get a clear word from Jesus, act on it and marvel as he responds by doing things in our lives we never dreamed possible.
Posted by Chris Whitler at 7:50 AM