My small attempt to be like my good friend Aaron... 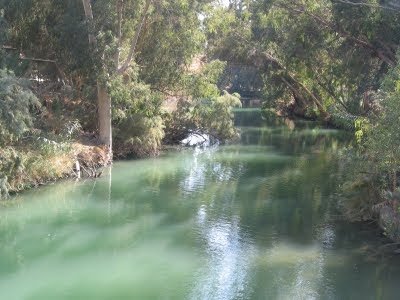 The adrenaline of having escaped worked it's way through his veins and he felt a flash of panic followed by a kind of anger. But anger that reveled itself through a swell of tears. They all had stones in their hand and it was rare but this time he had chosen to engage.

"If you don't believe me, at least believe what I'm doing. You can see it with your own eyes!"

But even the grace he witnessed coming from his own hands was not enough to satisfy the hungry, blind stones. They wanted blood.

As the angry crowd pushed toward him, everything slowed down. He didn't have the full picture in his mind of how it would all end but he did have the keen sense that it would not be today.

And then, he wasn't there. For all the crowd knew, he had slipped around the corner in the push of people headed to the market.

But he was by a river. Then, he recognized the place. Not a river, the river. He was standing at the familiar little crook. The water was quiet here. He was alone. Not alone but alone.

He sat down and drank in the calm. This was the very spot. And the voice, at once familiar and alien, called out in his thoughts again. "This is my son whom I love. I am so pleased with him!"

He had recently had a good idea for a story about a father watching down the road for his son but he hadn't had the time to develop the details. As he sat there by the river, more of it came to him.

It wasn't long before some people recognized him sitting there. Soon the word spread and a little group had gathered around him. He tried his new story out on them. It seemed like this was going to be a good one.