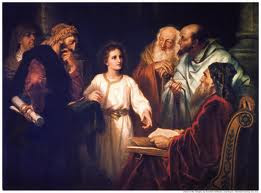 "After three days they found him in the temple, sitting among the teachers, listening to them and asking them questions; and all who heard him were amazed at his understanding and his answers. And when they saw him they were astonished; and his mother said to him, 'Son, why have you treated us so? Behold, your father and I have been looking for you anxiously.' And he said to them, 'How is it that you sought me? Did you not know that I must be in my Father's house?'

Losing track of a child is really scary. Mary and Joseph had been searching frantically for the boy Jesus for three days. When they found him, they were immediately relieved then it seems, immediately exasperated.

We think of Jesus' answer here as surrounded by angelic music, a small light shining down on his face. I think, as a parent, this answer would have sent me through the roof. But Mary and Joseph don't react. Relieved, they take the boy home "and his mother kept all these things in her heart."

Twelve long years ago, Mary and Joseph had been visited by angels and had been sure of their calling to birth and raise the Messiah into the world. They were willing to endure discomfort and difficulty for the sake of that call. But then that calling became keeping house, making money, paying bills, cooking and eating and observing routines.

How easy for us to forget the plot in our routines. I think Mary and Joseph don't get angry here because realization hits them in the face. "Oh, right. Angels, star, mission, Messiah, wise men...he's not just another boy. He's Jesus."

Later on, others who had walked with Jesus, seen miracles and heard him speak would be distraught for three days. In their grief and disappointment, they forgot their hope. They found Jesus too, right where he said he'd be.

You have seen miracles. You have been sure of a calling. You have been full of faith and willing to take risks and face difficulty for the sake of bringing some good into the world. What's happened? Have you lost your edge in routines? Have you forgotten where you come from and where you are going? In grief and disappointment, are you robbed of hope and joy?

Jesus is alive.
Posted by Chris Whitler at 6:45 AM

"First born of many brothers,
run and tell the others..."

Thank you Chris, right into my heart.