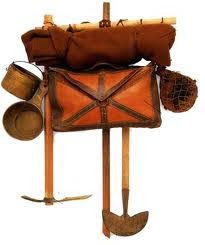 "If any man would come after me, let him deny himself and take up his cross daily and follow me." Luke 9:23

The young man sat in the shade of a small tree. It was the heat of the day, on a day that felt as thirsty as the dogs that lay panting in the nooks and slivers of shadow. A sparrow lit upon a ledge, its tiny beak open, too tired to sing. Few people were busy about the small town. Three men sat under the awning of a shop’s front door, not speaking, keeping an indolent eye on the street.

A man walked wearily toward him, a lone figure in the empty avenue. He was a foreigner, a soldier. The three watchmen blankly followed him with their eyes, somehow giving the impression of both contempt and apathy. The young man could see the soldier’s face shining with perspiration. His shield was strapped to his back, and over his shoulder he carried a large tent pole. With it was a simple wooden cross frame, his bedroll tied across the top and from which dangled a large pack and sundries. A metal canteen and a small cooking pot clanked noisily with each step, echoing down the silent street.

Read the rest of the story HERE...
Posted by Chris Whitler at 6:21 AM