A few of my favorite things...

C.S. Lewis - I recently read the second book in his science fiction trilogy and wow...what an imagination. It’s good and thought provoking and if you go into it expecting Narnia you soon know you’re wrong. This is Lewis the philosopher and these books read like Plato’s dialogues... philosophy, theology and social commentary all wrapped up in a story of a man’s trip to Venus. It was tough to get through because of the language and the largeness of the ideas but it was enjoyable. I always enjoy Lewis’ tone. He writes like a cool uncle... wistful, thoughtful and not afraid of unconventional ideas that always lead you to the most foundational things after all.

Missionary Stories - I also just finished “Tomorrow You Die”, a YWAM book by Reona Peterson Joly about her trip with a friend to pass out Bibles in communist Albania. The two were caught toward the end of their journey, facing interrogation and fear tactics from authorities. It’s a good story about God’s faithfulness to prepare his people for what he’s called them to do.

I also had the opportunity to see “End Of The Spear” with Amie and a group of friends this past Friday. I would highly recommend seeing it. It is a griping story around the 5 missionaries that were killed in Ecuador by members of a violent tribe they were trying to reach. Told from the perspective of Steve Saint, the son of one of the victims, it is an important story about the power of forgiveness to bring real change.

When a plan comes together - Last Thursday happened like every Thursday. We loaded up our gray, “has seen better days” van with bread and distributed it to families in needy areas of our city. At our last stop, a mother that we have been getting to know and her 4 small children were hanging out around the van toward the end of our time. It was a very cold day (yes, we have them in California). Getting curious, we asked her what she was up to and where she was staying. They had just lost their housing and she had been on the streets with these little kids all day not knowing what to do.

The sun was going down and it was getting colder and threatening to rain. We were on the verge of leaving but I’m so glad we asked her if she had a place. I quickly called the mission while my father-in-law loaded all their bikes in his van and Jimmy and Leah loaded all the kids in our van. The mission didn’t know if they had beds for them but committed to finding some place warm for them for the night. Thank God! I know you can’t win ‘em all but this was a case of the right place, right timing and willing folks to help make a difference to some little kids and their stressed out mom.

Guilty pleasures - I’m really digging reruns of the one season show “Firefly” and I’m a good ways into “Harry Potter and the Order of the Phoenix”. What? You gotta let up sometimes!
Posted by Chris Whitler at 10:38 AM 1 comment:

The parable of the septic tank 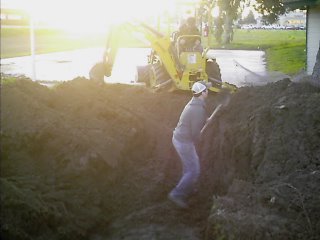 Last week was a mess. Jimmy and I noticed a spot on the church property that was wet and kinda weird. There was a perfect dome of grass with water leaking out one side. When I touched it with my foot, the dome wavered like gelatin or a water bed. Jimmy said, “This is the part in the horror movie when we run...” It smelled clean so we decided it was probably run off from the parking lot cause we’d had a lot of rain lately.

It didn’t go away. Then it started to look gray. With sinking hearts, on monday of last week we decided to check the septic clean outs. Unscrewing one lid we found standing water in one. Unscrewing the next one down, it exploded in a varitable fireworks display of things that are supposed to go down into the septic tank. We couldn’t believe it! Either we had a broken line or the tank was full and overflowing and nobody has been able to locate the tank for quite some time.

We set ourselves to the task though and God met us. Within hours, someone had rented us a little back hoe and brother James from church (who has much back hoe experience) came to help us dig. By late afternoon, James had found the tank and had it completely uncovered, a septic pump truck was called and we had dug around a bit of line that got broken in the process to get it ready for repair. Wisdom, advise and help came to us in many ways to do this huge, messy job that we didn’t now how to do. Jimmy and I spent most of the time down in the trench with wader boots on trying to find any other problems.

We got to the place where we were going to close up the septic line and fill in the hole when it cam to us that we should just see if the line was clear all the way. We stuck a hose in to see if it would flow into the tank and the water just ran back out on us. Jimmy dug down to the point of resistance and wouldn’t you know it, right through our septic line, right where the ooze was a tree root had broken through and caused a clog. We stuck our shovels in and out flowed...er...all the things that should go into the septic tank! AHHHHH!!!

So we dug back and wouldn’t you know that that piece of the pipe came out really easily and evenly...which is bad. It looked like that long ago, when the septic line was laid, no one bothered to GLUE THE PIPES TOGETHER! So we tied it together correctly, filled in the hole and two days later the job was done and everything was flowing again. Yeah!

So what have we learned here kids. To keep a system flowing properly you have to...

1. Maintain it...regularly clean out the gook that could stop you up

2. Guard it...be on watch for outside dangers that want to come in and cause trouble

3. Do it right the first time...the words of my father haunt me and I’m passing them on to my sons, “If you are going to do something, do it right.” Work like there is a future

4. There is wisdom in many councilors...each person that came to help us figure out this puzzle had a piece, not the whole of the solution. I am grateful for it all and I am really grateful that it is done.
Posted by Chris Whitler at 7:08 AM No comments:

War is a Racket

I watched "The Lord of the Rings: The Two Towers" on New Year's Day. Past all the fun eye candy of these films lies the heart of a stirring story...the saddness of lost beauty, dealing with change, the short sightedness of mankind, the nature of greed and power and the stuggle of the small against the insurmountable. This is one of my favorite stories and deals with mythic evil turning the machine of war on the innocent. In mythology, struggles are really black and white. Evil is really evil and good is really good. We do not have the privilidge of this kind of perspective in real life.

I got to thinking about this war that we are sleeping through here in the U.S. Why are we there? What have we done? What a mess we've made of things. And we don't even really talk about it anymore. The only protesters we hear are all the freaky fringe people that say really dumb things for sound bytes and supporters care more about economic issues here at home than about the real struggle of two severly different cultures literally clashing with life and death...real death, not movie death, at stake.

Where is the church? Where are our prayers? Do we pray? If we pray, do we only pray for the safety of "our troops"? Do we believe the scriptures that the gospel is for every tribe, tounge and nation? Do we hate Muslims? Is our struggle against flesh and blood? Are we seeking to be understood more than to understand? Are we looking after our own interests and not after the interests of others? Do we really love our enemies? Do we pray for those who persecute us and speak all manner of evil against us? Are we followers of Christ first or Americans first?

Looking around the internet, I came across this quote from Smedley Butler, one of our nations most decorated officers from World War 2. I found it interesting and wanted to share it. Take time to read it and respond...
War Is A Racket

Excerpt from a speech delivered in 1933, by Major General Smedley Butler, USMC.

WAR is a racket. It always has been

A racket is best described, I believe, as something that is not what it seems to the majority of the people. Only a small "inside" group knows what it is about. It is conducted for the benefit of the very few, at the expense of the very many. Out of war a few people make huge fortunes.

In the World War [I] a mere handful garnered the profits of the conflict. At least 21,000 new millionaires and billionaires were made in the United States during the World War. That many admitted their huge blood gains in their income tax returns. How many other war millionaires falsified their tax returns no one knows.

Out of war nations acquire additional territory, if they are victorious. They just take it. This newly acquired territory promptly is exploited by the few – the selfsame few who wrung dollars out of blood in the war. The general public shoulders the bill.

And what is this bill?

For a great many years, as a soldier, I had a suspicion that war was a racket; not until I retired to civil life did I fully realize it.
Posted by Chris Whitler at 1:33 PM 2 comments: