You Did Not Have A Home

This is a recording done fairly early on in our work here in Modesto. This is a cover by Jimmy, Aaron and myself of the late Rich Mullins' song "You Did Not Have A Home" from The Jesus Record. I don't quite remember why we wanted to record this song (maybe for a fund raiser of some sort?) but it's a recording I have always enjoyed. Hope you do too. And be sure to listen really carefully at the end :)


Posted by Chris Whitler at 8:13 PM No comments:

Sam performed this for our congregation this past Sunday, Silent Night on the ukulele...


Posted by Chris Whitler at 8:57 AM No comments:

This song was written and recorded quite a few years ago not long after we came to Modesto. A friend, Josh Davenport (who you'll hear on the track) was making an impromptu Christmas CD for his family as a gift. We were recording some standard Christmas songs together and Josh asked me if I wanted to include anything in the collection.

I told him to give me a minute and I went out into the next room and wrote this little song in about 10 minutes. Listening now, it sounds a bit like I wrote it in 10 minutes. But there are a few things that commend it.

I love how the chorus worked out. And I also love Josh's improv of the bridge.

This is a good snap shot of where my heart was in this time. Once, I came up on a woman's room in an old run down motel on 9th Street here in Modesto. I was going to let her know we were there to share food with the residents. This is a woman I see and have some interaction with every week to this day. She was passed out from drink in a fitful sleep on her bed.

I realized that I had a certain image of this woman's life just based on my small interactions with her for maybe an hour a week. But she lives in a hovel on South 9th Street all the time. She is still there when I am not.

But I have also come to realize that God is there whether I am there or not. The Christmas story is that God enters our reality and brings His healing and grace through our broken systems and "realities."

I suppose this song doesn't have anything new to say in the way of Christmas reflection. But, sometimes, saying the old thing is good enough.

"He has mercy on those who fear him,
from generation to generation.
He has shown strength with his arm
and has scattered the proud in their conceit,
Casting down the mighty from their thrones
and lifting up the lowly.
He has filled the hungry with good things
and sent the rich away empty."
~Mary, from Luke 1

Posted by Chris Whitler at 9:13 AM No comments:

Holding on to hope - by Chris 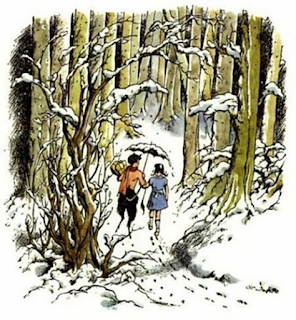 This is taken from a talk I gave to our congregation this past Sunday, the first Sunday of Advent...

On our Thanksgiving road trip to Oregon, we listened to C.S. Lewis’ The Lion, the Witch and the Wardrobe. The children in the book discover a new world, Narnia, where an evil witch has cast a terrible spell over the land. It is always winter and never Christmas.

But the resisting forces in Narnia, the woodland creatures, keep telling one another that Aslan, the Great Lion, the true King, is “on the move.” The name and this news lifts the children’s hearts, even though they have never met Aslan face to face.

Then Father Christmas visits the children and gives gifts for the upcoming battle with the witch.
Then the animals begin to celebrate and have meals together.
Then the snow begins to melt.
Then flowers and green patches begin to appear.
Then, the river starts to run.
And everyone, though a great battle lies ahead, begins to have hope

Just before we left Oregon to head back home, my brother-in-law said, “I hate it how the sun sets at 4:30 these days!” And my sister-in-law, as an encouragement, said, “Just watch everyday how it starts to grow later! How the time for sunset moves back a little bit everyday.”

And, of course, she’s right. I checked…online.

The change is slight, so small we barely notice.

This gradual change is exactly why the Advent and Christmas seasons are where they are in the year. So much more than Jesus’ “birthday,” it is all about His arrival in history, His arrival in our lives and His return.

With that in mind, here are some thoughts (Italicized) on this past Sunday’s gospel reading…

25 “There will be signs in sun and moon and stars, and on the earth dismay among nations,

Is there dismay among the nations of our world right now?

in perplexity at the roaring of the sea and the waves,

Is there perplexity at the roaring of the sea? Are folks wondering and worried at rising tides, environmental upheaval, and strange storms?

26 men fainting from fear and the expectation of the things which are coming upon the world;

Are people fainting in fear of the expectation of things to come? Are futures unsure? Are people afraid by what they see on the news?

for the powers of the heavens will be shaken.

27 Then they will see the Son of Man coming in a cloud with power and great glory. 28 But when these things begin to take place,

My Mother used to use this phrase to get my attention. It was always shocking when she said it. “Chris, straighten up!” And I would. She had my attention.

lift up your heads,

Recently, my daughter Stella wrote an argument paper for school titled, “Why Children Should Be Allowed To Have Cell Phones.” I have no idea why she chose this topic. *ahem* Anyway, in the paper, she had to include an argument from the other side. She said that one bad outcome of children having cell phones is that their heads are always down.

Perhaps that’s a bad outcome of all of us having cell phones. News feeds consume our lives. Fear, worry, envy and political arguments are only a finger swipe away. Jesus calls us to be people who lift up our heads because…

because your redemption is drawing near.”

Verse 34 “Be on guard, so that your hearts will not be weighted down with

drunkenness - escape of our reality with false support

and the worries of life - anxiety

and that day will not come on you suddenly like a trap; 35 for it will come upon all those who dwell on the face of all the earth. 36 But keep on the alert at all times, praying that you may have strength to escape all these things that are about to take place, and to stand before the Son of Man.”

We can’t do this alone. If I’m going to get there, it’s with the community in which God has placed me.

We read the Bible personally, as if Jesus is talking right to us. And He is. But this passage of scripture, most passages of scripture, are written to the community. Jesus is speaking to a group here. He is not so much speaking to you as He is to “you all.”

You all be on guard. Don't let your hearts, all of your hearts, become weighted down with failing energy, escape or anxiety. You all keep on the alert. You all pray for strength (for one another) to get through and to stand before Jesus.

What if your congregation is exactly the congregation, the people that God wants you to be with? What if God has called you with these people, with your gifts, to be used to further the mission of His Kingdom? You can’t do it alone.

Don’t dissipate, don’t escape, don’t get caught up in the anxieties of this life.

Christmas is coming, the light is returning, the day is getting longer.