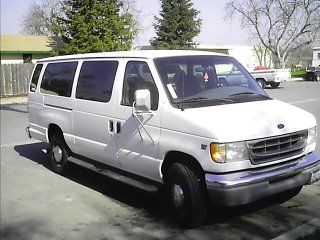 We have had a string of precarious vans to do the work of the our ministry in. The first was Big Whitey...a 1970’s ambulance that had it’s oversized back gutted out for us to fill with bread, furniture...whatever. Whitey died and my father-in-law procured an old van (which still runs) fro a friend.

My father-in-law helps people find things that they need...and sometimes things that they don’t need but we’ll forgive him for that cause I’ve seen him help make the connection between many who have lost everything with just the right things to help start a new life. We used that old van for a while until it had a period of non-driveableness.

Then a local band that had broken up gave us their old tour van. It was gray, kinda beat up but served the job well. They did not clean it up completely so we had quite a job doing that...6 guys on tour with no real...uh...cleaning habits and plenty of...er...other habits. But it got sorta clean. Then the doors wouldn’t stay shut so we put shed hasps on to keep them closed (I’m pretty sure that was illegal) and some seat belts got kinda chewed up.

Then we met some guys named Bob. These Bobs felt God calling them to help us get a van. Last week while putting water in the top of the radiator and having just as much come out the bottom of the radiator it started making a funny, loud noise and then something blew and then it wouldn’t steer correctly and so we called the Bobs. We have a brand new ministry van! It’s the nicest, newest vehicle I’ve ever had and it dropped into our laps through the grace of God and some generous, obedient Bobs!

We got to use it for the first time this week on our Thursday bread run and our Friday trip to the residential motels on 9th Street. It is a dream...AC, comfy seats (15 passenger!), nice radio, diesel fuel, 2001, sweet ride, no carpet (that kinda gets messy when you are taking food out) all insured, registered and just a blessing.

As if it could get better, it does. This week, our good friend Stella who lived with her daughter and grand kids at the Shiva motel in a yucky room with roaches and rats and a horrid landlord that made her pay over $1,000.00 (charging for each child and extra for a microwave and fridge) got out! We have been praying for her to get out for so long! They now live on a nice quiet street in a 3 BEDROOM HOUSE for less than what they paid at that motel. We visited their new house yesterday in our new van and had a great time of basking in God’s goodness to all of us.

The glory is His.
Posted by Chris Whitler at 11:21 AM No comments: 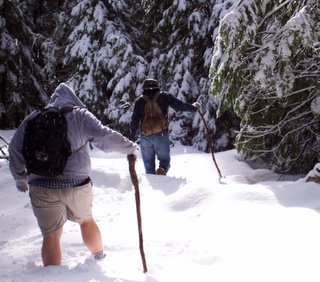 Well, Aaron came home this last week and we took him up to a favorite spot to hike in the snow. It wasn't so special to him as he had been in Canada for over a month for a bit of a break. We're realising that street workers generally go a little nuts because there's not much budget or time for vacation and you're constantly dealing with folks in desperate situations. That can tend to get under your emotional skin after a while. That's why Aaron went away and that's why we're going for a hike every now and then...out of the valley and into some clean air. The day turned out to be fun. Jimmy's Car broke down in Sonora and we had it towed back to Modesto and we got to ride in the car up on top of the tow truck! That was fun...we laughed all the way back to the church.

A side note...Jimmy's front wheel siezed up and the car wouldn't come out of 4 wheel drive. The dealership told him that it was a very expensive repair. Jimmy tried to get the wheel to turn himself and it wouldn't budge...he also pulled as hard as he could on the 4 wheel drive shifter and it would not budge. He said a prayer for provision and in the next instant the wheel worked and the 4 wheel drive disengaged and thier car is fine. God is good! I'm glad we didn't think to pray in Sonora, we would have missed that sweet ride!
Posted by Chris Whitler at 7:00 AM 1 comment: